Throwing a Quinceañera for Ava: Honoring Her Mexican Heritage - 2 Dads with Baggage
Skip to content 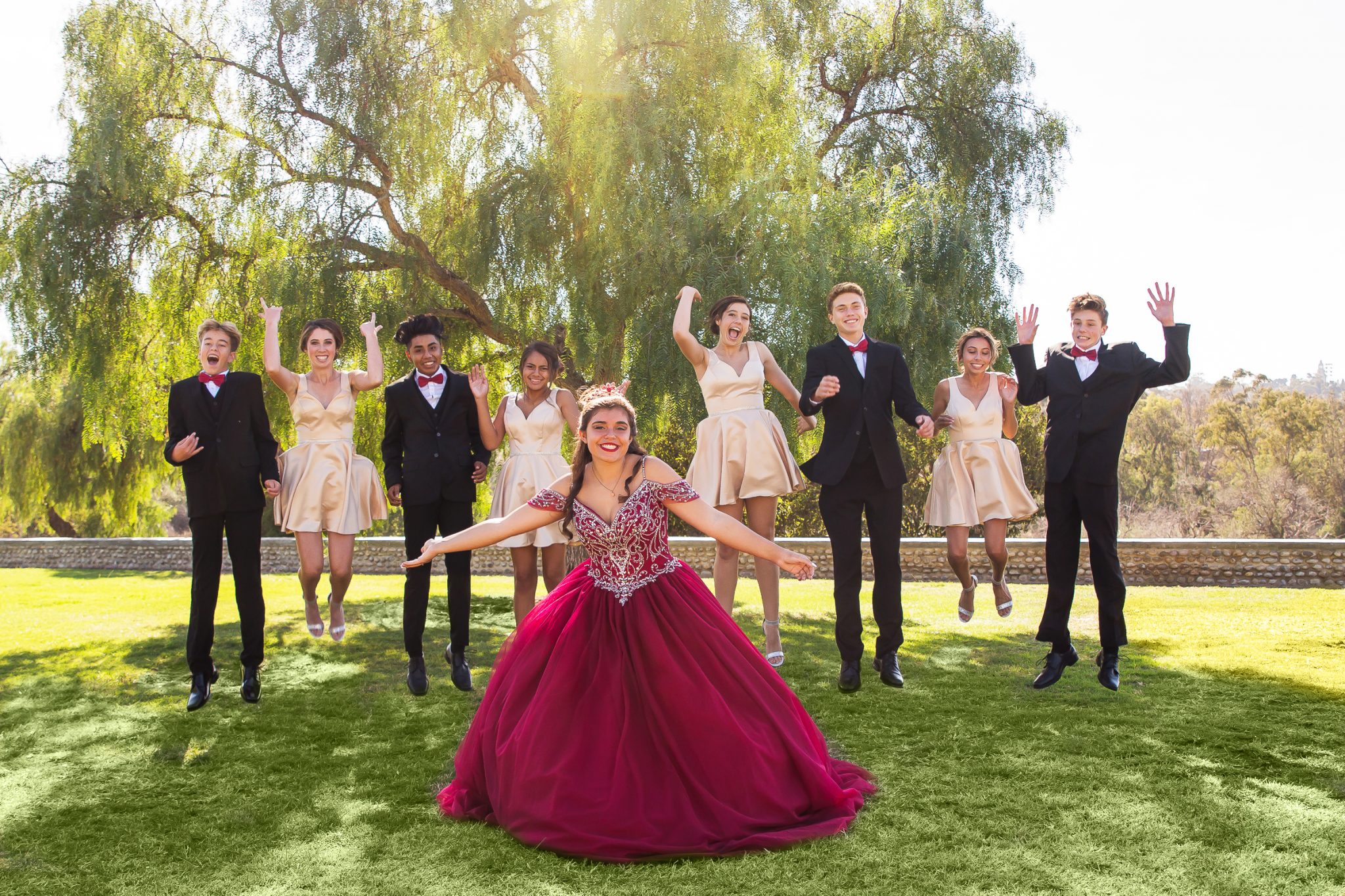 When we adopted Sophia and then Ava, we met their birth mothers while they were still pregnant with our little girls. We got to know them a bit, and learn some history of their family backgrounds. Sophia’s sweet birth mom can be traced back to roots from El Salvador, and her birth dad is Mexican American – both born in the US to immigrant parents. Almost two years later, Ava was born in Las Vegas to a wonderful Caucasian birth mom, and her birth father is from Mexico. With two white dads, we knew from the start it would be important for us to provide our girls with ties to their backgrounds. That’s why we decided throwing a Quinceañera for Ava was a good idea, honoring her Mexican heritage through this meaningful celebration. 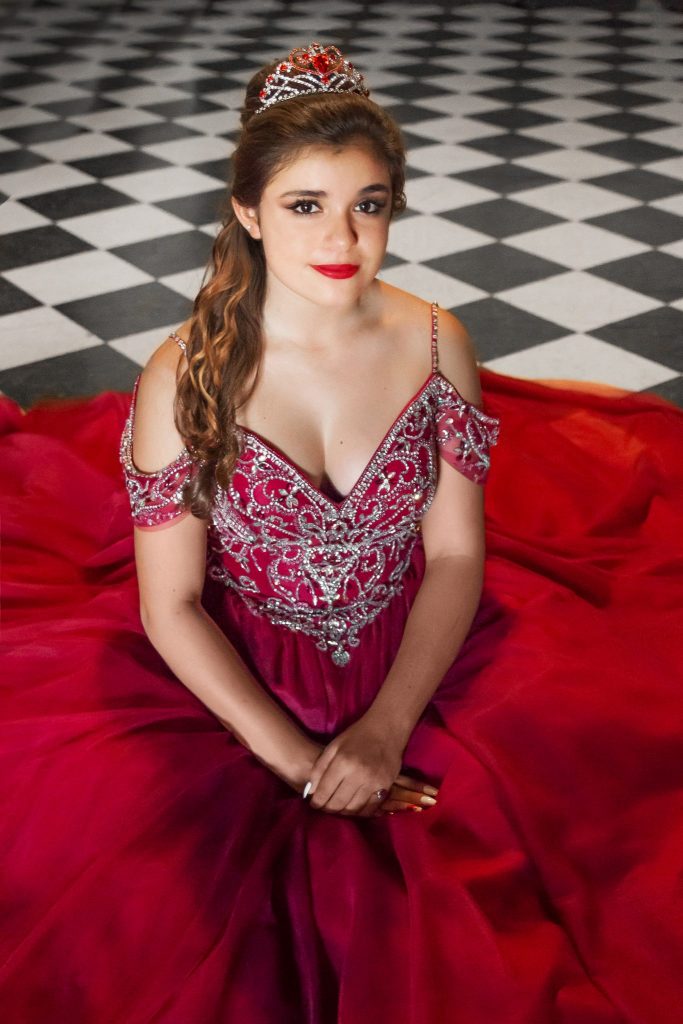 Actually we offered both our daughters the option of having a Quinceañera. They were given a choice, really. They could have a car to drive when they got their licenses, or they could have a Quinceañera. Sophia chose the car, while Ava opted for the party. After all, she had been asking us for a Quince since she was about seven years old.

We’ve done a number of things over the years to make sure Sophia and Ava had connections to their Latina roots. But this party? It a was next-level tradition we had no knowledge of, so we had to learn fast!

From the time Sophia was 2 months, we’ve had a nanny who does not speak English – only Spanish. Through her constant presence even now, our girls have heard the Spanish language spoken since they could understand any words at all. Both fluent in Spanish now, our girls can rip a sentence or two in rapid fire that makes my head spin. They passed my ability to comprehend simple Spanish long ago. Triton speaks zero. Now they have full conversations in Spanish just so they can leave us out!

As our daughters have grown, we’ve sought a lot of counsel in how best to connect them with their heritage. Luckily our sister-in-law Liliana was born in Mexico and has helped us navigate authentic connections. Ava and Sophia adore their Tia, and she provides them with an important role model as a successful Latina professional and mother. Other Latino friends have also helped, making sure we knew some of the holiday traditions, meals and celebrations to follow. From these conversations, we learned about the Quinceañera.

What is a Quinceañera?

If you didn’t know before reading this, that’s ok – at the beginning we didn’t either. Simply put, a Quinceañera celebrates a girls’ 15th birthday – that’s literally what the word means. But it’s actually far from simple. The Quinceañera is a long-held tradition with roots dating back to Mayan times, and is more like a Rite of Passage. When this tradition began all those years ago, 15 years old was considered of marrying age. The Quinceañera marked an important milestone in a girl’s development from a teen into a woman. Kind of like a Sweet Sixteen Party with much more pomp and circumstance, the Quinceañera is a big darn deal.

Throwing a Quinceañera for Ava

In our family, we’ve got some complications. First, the parents are not Mexican and have no history in throwing this party. Second, there are two dads and usually the mom is the one to organize the Quinceañera. And third, we are not religious. In the Mexican tradition, the giant Quinceañera party is preceeded by a Catholic mass said in honor of the birthday girl. We just skipped that part and went straight to throwing a Quinceañera for Ava that would be totally fun for us all.

There were several Quinceañera traditions we did want to keep to honor Ava’s Mexican heritage:

Oh, did I mention she sat on a throne while all these things were presented? Yes she sure did.

Here’s some of the highlights of our experiences throwing a Quinceañera for Ava.

Theme – Often the party has a theme, and Ava wanted hers to be themed as Alice in Wonderland. She had planned out how she wanted the room to look, what decorations she thought would look nice, and what her  damas and chambelanes to wear (more on those important positions further down).

Dress – Quinceañeras are known for their elaborate dresses, and most look like ball gowns from Cinderella or something. Poofy, voluminous and over-the-top, these dresses put wedding gowns to shame in their circumference and bling quotient. Ava wanted a red dress so she could be in the Alice in Wonderland theme by starring as the Queen of Hearts, but a nice one this time.

Dancing – In modern times, Quinceañeras include elaborate dances that have been choreographed by an expert. Ava and her entourage practiced these dance moves for 10 weeks straight, schlepping to Rosie’s dance studio to learn first a waltz and then a hip hop routine. This dance would be performed as a Baile Sopresa (surprise dance) at the party. Afterwards, the deejay pumped it up and the whole crowd danced for hours.

Venue – We were really trying to keep the budget for this whole thing within reasonable means. Choosing a venue for the party needed to serve the purpose of fitting about 80 people with a dance floor, cool factor and character. Not a hotel ballroom. Queen Bee’s was the choice after looking at many, and it was a perfect venue for the festivities.

The Court – Each Quinceañera has a court made from the birthday girls’ best girl and boy friends. Ava chose her sister as her escort, which was actually really sweet. She then asked four girls to be her damas, and four boys to be her chambelanes. The girls were asked to wear matching dresses and shoes, just like bridesmaids. The boys wore matching suits and bow ties.

Decorations – All I can say is thank goodness for Pinterest and Amazon. A quick search on Pinterest turned up dozens of Alice in Wonderland party ideas, complete with a photo library to help visualize the options. From there, I found everything I needed on Amazon to help bling out the room. Giant decks of playing cards, hanging garlands in hearts, clubs, diamonds and spades, and more. With a few bunches of fun balloons thrown in, we were good to go. Teapots with roses were the centerpieces, with playing cards stuck in for good measure.

Catering – In keeping with tradition, we had a Mexican meal catered by nearby restaurant City Tacos. Carne asada, pollo, tortillas, frijoles and guacamole where all on the menu. Delicious! Of course there was an open bar – after all, it was our party. Bourbon anyone>

The Cake – Ava wanted cupcakes instead of a big tiered number, and we worked with the bakery to follow the theme. Babycakes made several different kinds of cupcakes, all decorated to fit the Alice in Wonderland theme. They even displayed them on a giant tiered serving platter to make a beautiful presentation. (My favorite was the pistachio cupcake with mascarpone cream cheese frosting. Yum.)

Deejay – Queen Bee’s recommended a deejay who ended up doing a fantastic job. Not only did he play music the kids (and adults) loved for dancing, he was our emcee and announcer. With an agenda full of items we had to accomplish, he kept us laughing, dancing and on track.

Photo Shoot – After the kids were dressed and before the guests started to arrive, we all schlepped to a park nearby for photos. A professional photographer was chosen to take these shots. Despite the drunken homeless man yelling at us to “get out of his flowers”, we managed to take some pretty great pictures. The photographer stayed with us for the rest of the evening.

Guests – Ava invited all her close friends, her team mates from cheerleading, and her family. We also included some of our friends, and ended up with a total of about 80 people – and that was keeping the list lean. From the looks of things on that dance floor, everyone had a great time.

Phew! It was a lot of work – kind of like throwing a wedding. Ava is over the moon about having this celebration, and we’re so happy we were able to provide her with this special connection to her Mexican heritage.

At least now we have this practice under our belts. When Sophia and Ava are ready to get married we’ve got the checklist and details ready to go. (Just not too soon, thank you.)

4 thoughts on “Throwing a Quinceañera for Ava: Honoring Her Mexican Heritage”