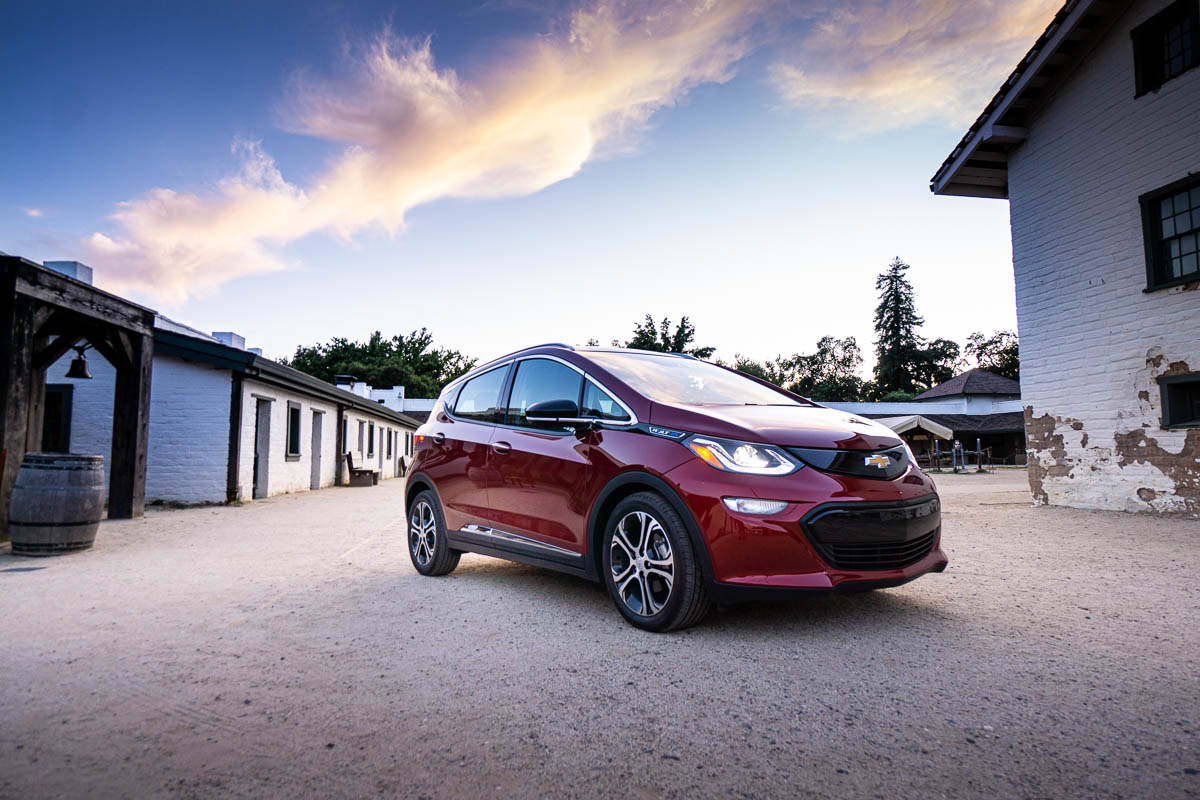 We were invited to spend a couple of days in Sacramento test driving a 2019 Chevy Bolt EV, and jumped at the opportunity. We’ve had a second-generation electric vehicle in our small fleet (tiny car to BIG TRUCK) for a couple years. We love it. The range is limited to about 75 miles once fully charged. I love driving the car, but I’m glad it’s a lease, since the technology is changing so rapidly in electric cars. The resale value on this vehicle is plummeting like stock in buggy whips. As the lease term is up at the end of the year, my husband Paul and I have started researching our electric options.

We were met at the airport by the ground team, and whisked away to a nearby parking lot where we were given a crash course in how to operate the car. They showed us some important features and given the key. So off we went.

If you haven’t driven an electric car yet, you really ought to go take a test drive.

We call our car at home Zippy for a reason. Electrics have a ton of torque, which means they take off like a rocket – there’s nothing like them. My husband is an old gear head with plenty of hot rods and motorcycles in his past (and future!). He is completely sold on the performance of these pocket rockets, and so am I.

The 2019 Chevy Bolt EV is a nice looking, four-door sedan with a 10.2-inch color touchscreen. We easily paired an iPhone for navigation via the car’s CarPlay feature. Chevy knows people are not using the on-board navigation systems anymore. People, like us, are using their mobile devices.

With a 360-degree camera view around the car as we backed out, we could tell this was going to be a fun ride. It’s uncanny – there are enough cameras on this car that it synthesizes a birds-eye view of the car itself. When it’s sitting in a parking lot, you see  a ton. The roof of the car, the parking stripes on the pavement and the cars adjacent to you are all visible. This makes those tiny spaces at the grocery store a breeze to enter and exit. Has a bit of a NSA spy satellite feel to it too.

After driving an electric car for two years now, I am a convert.

Life without gas stations is pretty nice. Drive home, plug in and you’re done. That nice $7500 federal tax incentive is scheduled to expire in March 2020, so get your test drive in soon. Electric cars are often charged on fossil-fuel grid sources. But California’s (and other states’) dedication to green, renewable power sources are advancing each year. At home, we try to charge during the day to take advantage of our solar power system. The 2019 Chevy Bolt’s charging system allows programming the time of charge to the lowest grid rates. Late nights and early mornings are best.

On the first night, we met our fellow test-drivers at the Shady Lady Saloon in downtown Sacramento. Great bar. A glorious throwback to the prohibition era. Shady Lady makes a serious cocktail and I highly recommend their Old Fashioned or Manhattan, both delicious and powerful. We didn’t drive.

Interesting progression in the hybrid/electric progression with manufacturers. Chevrolet no longer makes the hybrid Volt. With 20,000 charging stations (and more on the way) across the country, Chevy believes drivers can now have confidence in driving a fully electric vehicle. Range anxiety has been calmed sufficiently. The range on this Bolt is about the same as a single tank of gas in our traditional 2011 Hyundai Santa Fe. Granted, we can refuel the Hyundai in 12 minutes at any gas station. An electric vehicle like the Bolt demands about 30 minutes with a Level 2 charger for a 90-mile range.

The real fun began the next morning when test driving a 2019 Chevy Bolt EV started in earnest.

We were instructed to drive to Coloma, home of the Marshall Gold Discovery State Historical Park. The drive was 47 miles out of town and I could already feel my range anxiety ratcheting up. But with a max range of 238 miles, I had nothing to worry about. Even when I pushed the car into the high 70s (what, me speed?) it was no problem. In my car at home, this wears down the charge quickly. Also, our car at home was built to maximize range and minimize rolling resistance. The manufacturer used the Bridgestone Ecopia tires, running at over 40 psi. This makes for a pretty spindly ride. But the Bolt uses larger profile 50-series tires, resulting in a far more planted feel at freeway speed.

The BoltEV has a low, regen gear that allows the car to kinetically regenerate energy each time you take your foot off the pedal. The dashboard lets you know how your consumption is pacing. It also indicates when you’re driving at the ideal speed for energy usage, how you’re pacing behind the car in front of you and when the regen kicks in. The car we drove had all the bells and whistles, like blind spot warnings, distance to car ahead, etc.

You’ll learn a lot about California’s History in Sacramento.

We panned for gold (and didn’t really find any), then took a tour of the area. Although I’ve lived in California for more than 30 years, I learned a lot that day. We stood at the spot where the first gold was found. We saw where the first mining operation began, and an original store run by Chinese miners who came here by ship seeking fortune. If you get a chance to tour the area with a volunteer docent, we highly recommend it. You’ll learn about how California became part of the United States (leapfrogging thousands of miles that were not yet states). They also cover how the state, and country, built its wealth through the 750,000 pounds of gold mined in a five-year period.

After driving back to the city, once again with no range issues, we headed to lunch. We highly recommend the Magpie Café for healthy and delicious food in a relaxed environment. Our Chevy Bolt EV was still running strong with plenty of range and we figured we should make the most of it. So that afternoon we visited the Crocker Art Museum on the recommendation of a friend.

As we wandered around the museum, which has the world’s largest collection of California art, we suddenly found ourselves in an incredible ballroom. It was the Crocker Family’s ballroom built in 1872. After starting our museum visit with a super contemporary exhibit, it was quite a shock to be immersed in this early 19th century environment. The patterned wood floors and elaborate walls and ceilings were beautiful and soothing. It was a cool juxtaposition.

More California history was on tap before dinner as we toured Sutter’s Fort. This of course looped back to the stories we had heard at Discovery Park. Even though it was only a couple of hundred years ago, I was grateful not to be living with the daily challenges those early California pioneers faced just to eat each day. We tasted a delicious bread, recipe from the period, baked in the original outdoor oven of the Fort, slathered with freshly churned butter. I guess it wasn’t all bad back then.

A good night’s sleep is always a treat.

Back to the Citizen Hotel for our final night. We’ve stayed at the Citizen before and really enjoy the historic political cartoons throughout the hotel. It has quiet rooms and excellent service and food at The Grange, the hotel’s restaurant.

As we continue our journey to find the next right car, I’m glad we got to spend some time test driving a 2019 Chevy Bolt EV. The tech behind these cars is fascinating. It gives me a lot of hope for their eventual acceptance worldwide as an alternative to gas guzzling internal combustion cars. While electrics still have their limitations, specifically as touring cars, they have become the near-perfect solution to the daily-driving, commuting vehicle. 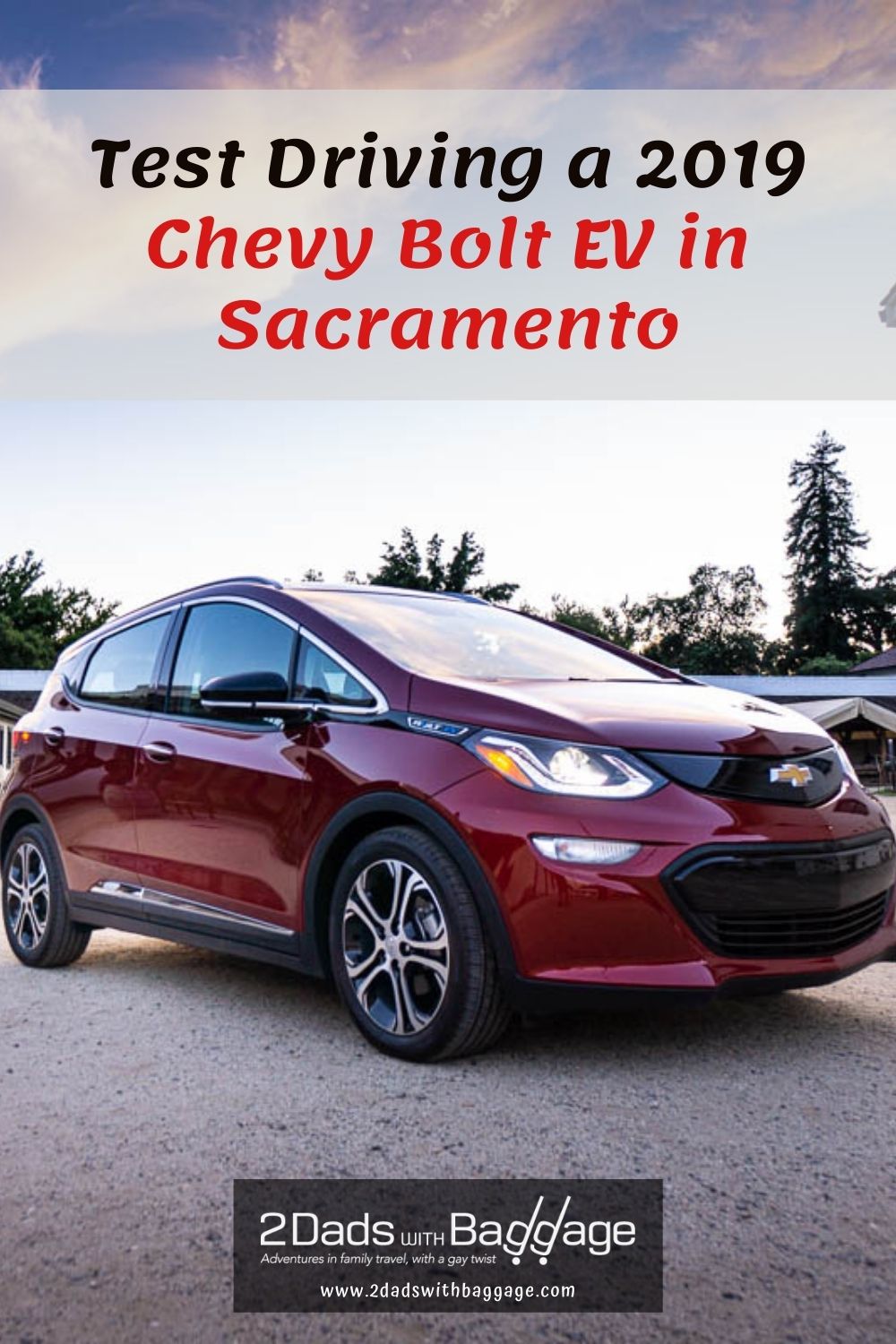