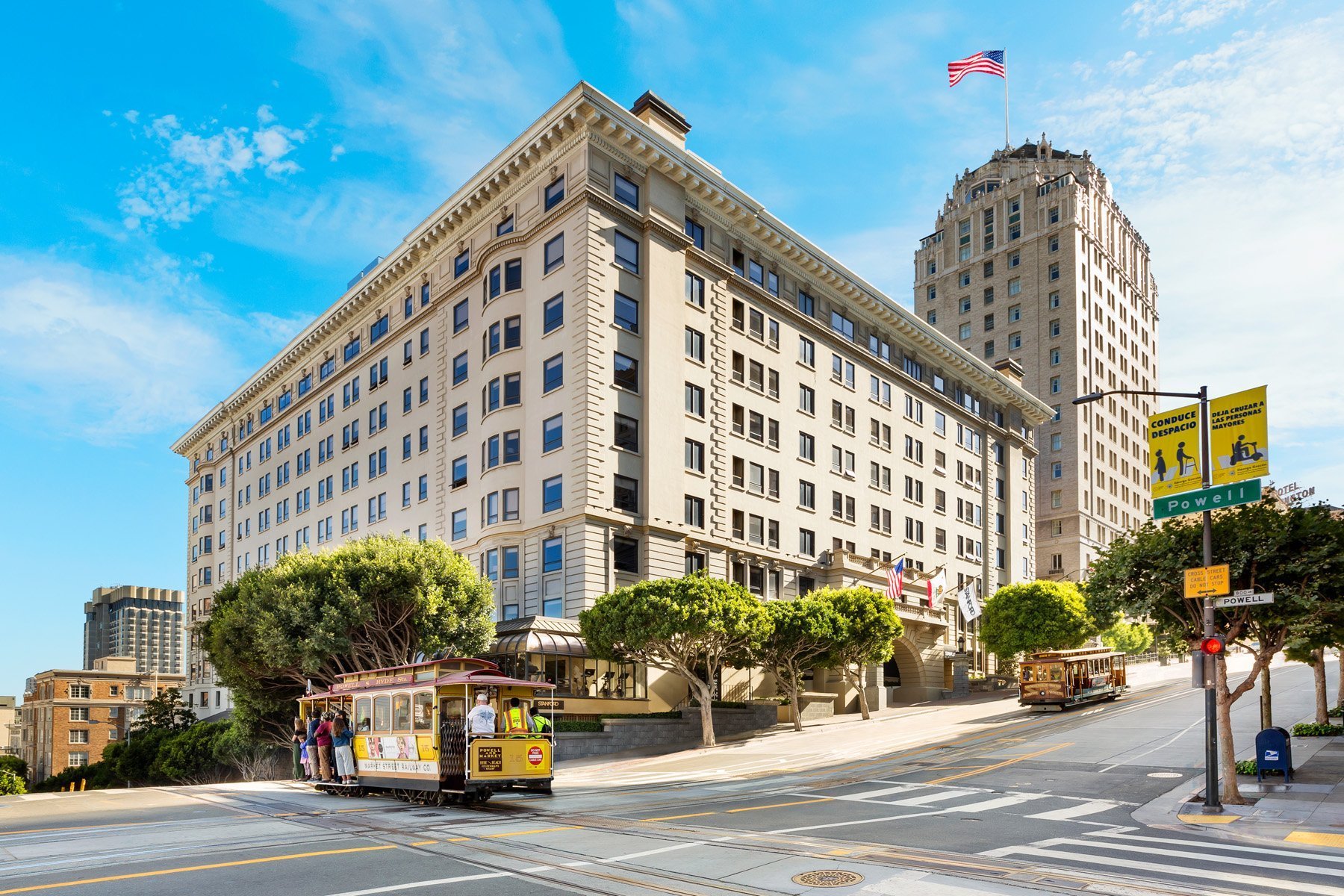 Back in the day when I lived in San Francisco, the Stanford Court Hotel was known as one of the poshest (is that a word?) places to stay in the City. And that’s saying a lot considering Nob Hill was – and is – full of luxury hotels. The Intercontinental Mark Hopkins Hotel, the Ritz-Carlton Nob Hill, the legendary Fairmont Hotel and more are all located within spitting distance of the Stanford Court.

Yet there is something about this hotel that makes it stand out from the others. Maybe it’s the prime location on the corner of the California Street and Powell Street cable car lines. Or maybe it’s the venerable old building in which it is housed. Perhaps the views from its upper floors. Or all of the above?

We spent a great weekend at the Stanford Court. When we arrived in our almost-embarrassing rental car, I remembered the hotel entrance and circular porte cochere from a former life. That and the outside facade of the hotel were the same from years ago, and that’s about the last thing that is the same. Except for the luxury part, of course. Everything about the new Stanford Court Hotel shouts approachable luxury hotel on Nob Hill.

Entering the lobby, we were greeted by some really cool art. Just outside the front doors sits an enormous stone penguin sculpture – very modern and very cool. With a well-appointed lobby, the walls are decorated with video art and other displays that bring a modern vibe to a historic structure. We also liked the front desk, which is very low-key and understated. It is literally a desk, with two people sitting behind it instead of a massive wall and a long line of guests waiting.

Room with a View

The views from our 8th floor corner room were stunning. In fact, I don’t remember the last time we’ve had such amazing views from a San Francisco hotel room. The fact that the building is not too tall – just 8 stories and 400 rooms – helps provide a more human scale view. We could see up and down California Street, all the way into the Financial District. As well, we looked out across the city is several directions, with views of the Bay Bridge, Pyramid Building and a host of other sights.

Just across from us, the kids were fascinated with the party set up on the roof of the Fairmont Hotel. I’m not sure I would have enjoyed seeing that set up from my room in that hotel, but from across the way it was a great vantage point. As it was, we spent quite some time just watching the world go from our gigantic windows.

Designers at the Stanford Court Hotel had a sense of restraint we appreciated. Everything is quite chic, from the lobby sitting room furniture to the high top community tables inside Seven Stills Restaurant. Have you ever been to a luxury hotel on Nob Hill (or anywhere else really) where you feel personally uncomfortable in its grandeur? Like it’s trying so hard, you feel like you don’t fit in? Yeah, not at the Stanford Court. Don’t get me wrong – it’s clearly luxurious but in a more relaxed way.

As we looked around us, the other guests were a well-heeled group of travelers from all over the world.  We heard French, German, Italian and New York among the guests. They all looked relaxed, comfortable in their own skins and not caught up in proving anything about their net worth.

That comfortable and chic design continued upstairs. The whole family was enamored with the design of our floor, and we thought the hall carpeting was especially fun. Woven into the carpet design, images of downtown buildings and skylines took on an innovative pattern we have never seen. Rather than muck it up with more-more-more, the hotel corridors are nicely simple. They left the impact to the rug and did not detract with other art. In the elevator lobbies on each floor, a fun piece of wall art hung on one wall. Designing each floor’s art differently, ours was baseball mitts artfully hung in a colorful pattern.

Inside our room, the palate was neutral. Again, this was a strong sign of restraint since the views from this hotel should take center stage. Stunning views become the primary art in the rooms. Just very well done. Plus extra points for a ridiculously comfy bed!

Outside the Stanford Court Hotel, guests can walk in pretty much any direction and find cool things to see. Walking up the hill to the west, you come to Grace Cathedral and its enormous plaza. In the opposite direction, you can walk down California Street into the Financial District and ultimately the Ferry Building and waterfront. Down towards the San Francisco Bay, you walk through Chinatown with all its sounds, smells and tastes.

We really enjoyed an energetic walk in this direction, seeing deliveries to butchers and restaurants of things we could not identify. (And some things we would have rather not recognized, like a whole hog!) Still, we stopped for dim sum at an unnamed restaurant that seemed popular with the locals. We were so glad we did, tasting small bites of things both delicious and mysterious.

Perhaps our favorite walk was down Powell Street towards Union Square. We left the kids asleep in the room and early in the morning before the crowds hit, this area is at its most beautiful. With streets freshly cleaned, cars and people are not zipping about, honking and whining. After peeping into  store windows, we grabbed croissants from a cafe in Union Square for sustenance. As the cable cars woke the dead with their clanging bells, we hoofed it back up to the hotel to continue our day of exploration throughout San Francisco.

Considering all that guests receive when staying at the Stanford Court Hotel, the value is clearly evident. Rooms here start at around $270 per night and go up from there. We think that price was well worth our experience, and would return to this hotel again if we planned on staying in the area. Truly a good value for a luxury hotel on Nob Hill in San Francisco. 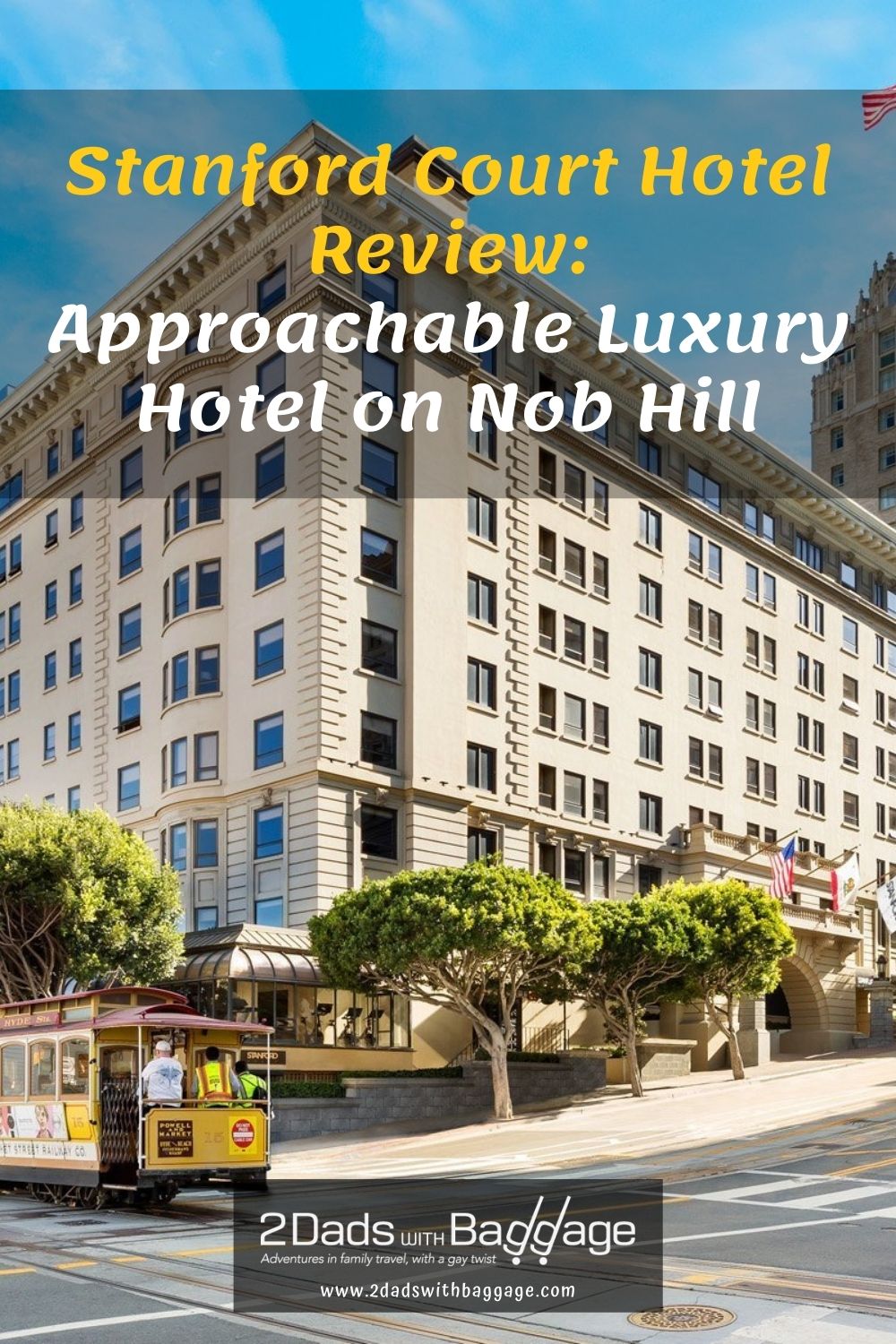