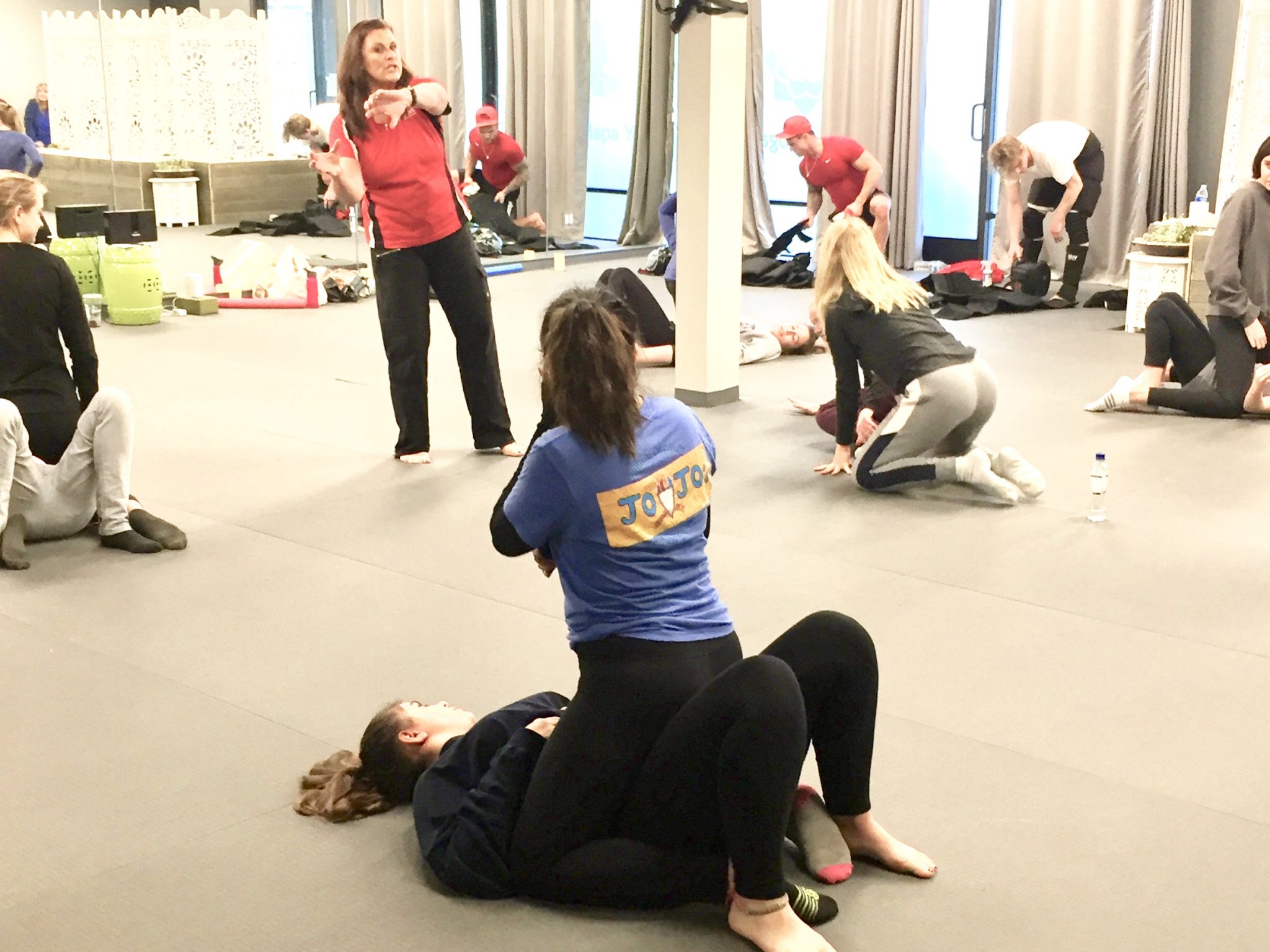 Last year there were some incidents at our girls’ high school that freaked us all out a little bit. We’ve always talked with our daughters about being aware of their surroundings. We’ve discussed how to get help if they found themselves in a difficult situation. However, boys can be aggressive and girls can be mean. We wanted Sophia and Ava to be able to physically defend themselves should they ever have to do that.

We decided to sign them up for a self defense classes for teens, and it was well worth the time, money and effort. Just yesterday, we had them take the class again. It was a good refresher and they reinforced important skills and behaviors.

Self Defense Classes for Teens

Since they really liked the class last year, Sophia and Ava asked several friends to join them again this year. It was interesting that all the girls were very interested in  this adventure. Like last year, we relied on the expertise of Tracie Arlington at Play It Safe Self Defense – classes for women and teens. Our girls really wanted to learn how to defend themselves physically. Not only would this process be a confidence booster. It would also empower Sophia and Ava with an important skill set. It turns out these self defense classes for teens was way more than that. They are just as important as self defense classes for women, if not more so.

According to the U.S. Dept. of Justice, one out of every four women will be attacked or raped in her lifetime. Look at these alarming statistics from the Play It Safe website:

Women who resist are twice as likely to escape injury as others. According to the Women’s Self Defense Institute, an analysis of 3,000 actual assaults showed that half of the attackers fled from a woman who was willing to resist!

Last year we searched online for options and found way more than we expected to see when we googled “self defense classes”. We found an enormous array of classes offered, and the choices became overwhelming. Did we want boxing? The use of tools like pepper spray or whistles? Did we want the classes to be more educational from a book lesson? Indoors or outdoors? Men present, or women only? Multiple days, or one long session? Hard core, or just tough enough?

After narrowing our search to wanting physical defense tactics with practical hands-on experiences, we started asking other parents for recommendations. Surprisingly, not many had researched this subject for their kids. We guessed there was a bigger need for self-defense services than any of us realized.

Triton finally spoke with a friend who had taken classes from Play It Safe.  Based on her positive review, we decided to sign Ava and Sophia up for a 3 1/2-hour Saturday session last year. We did the same session this year, and the girls loved it again.

The girls gathered with several others similar in age at a warehouse gym facility about 10 miles from our house. The organizers of Play It Safe told the parents they could stay for a bit and watch, but could not participate.

One of the greatest things that impressed the girls was the hands-on lessons in fighting back – with a real guy trying to attack them! There were two guys helping with the class, fully suited up in protective gear. One by one, the girls and women in the class took turns kicking and punching these poor guys. They used the skills they were learning in the class about how to fight off an attacker.

Some of the skills each girl learned how to:

And there was so much more.

How Self Defense Classes Made Them Feel

Just like last year, the girls were nearly giddy with excitement. They couldn’t wait to tell us all of the things they had learned (and demonstrate some of them)! They felt empowered and capable, but most of all they felt confident. Both Sophia and Ava were more self confident, and said they knew more from that three hour class about how to defend themselves than they had learned in all the years prior.

They’ve still got a lot more to learn, and need to be careful about letting down their guards in unsafe situations. But they are definitely more knowledgeable and prepared in case something ever happens.

Honestly, after watching them demonstrate some of their newly-learned moves, I wouldn’t want to cross them!