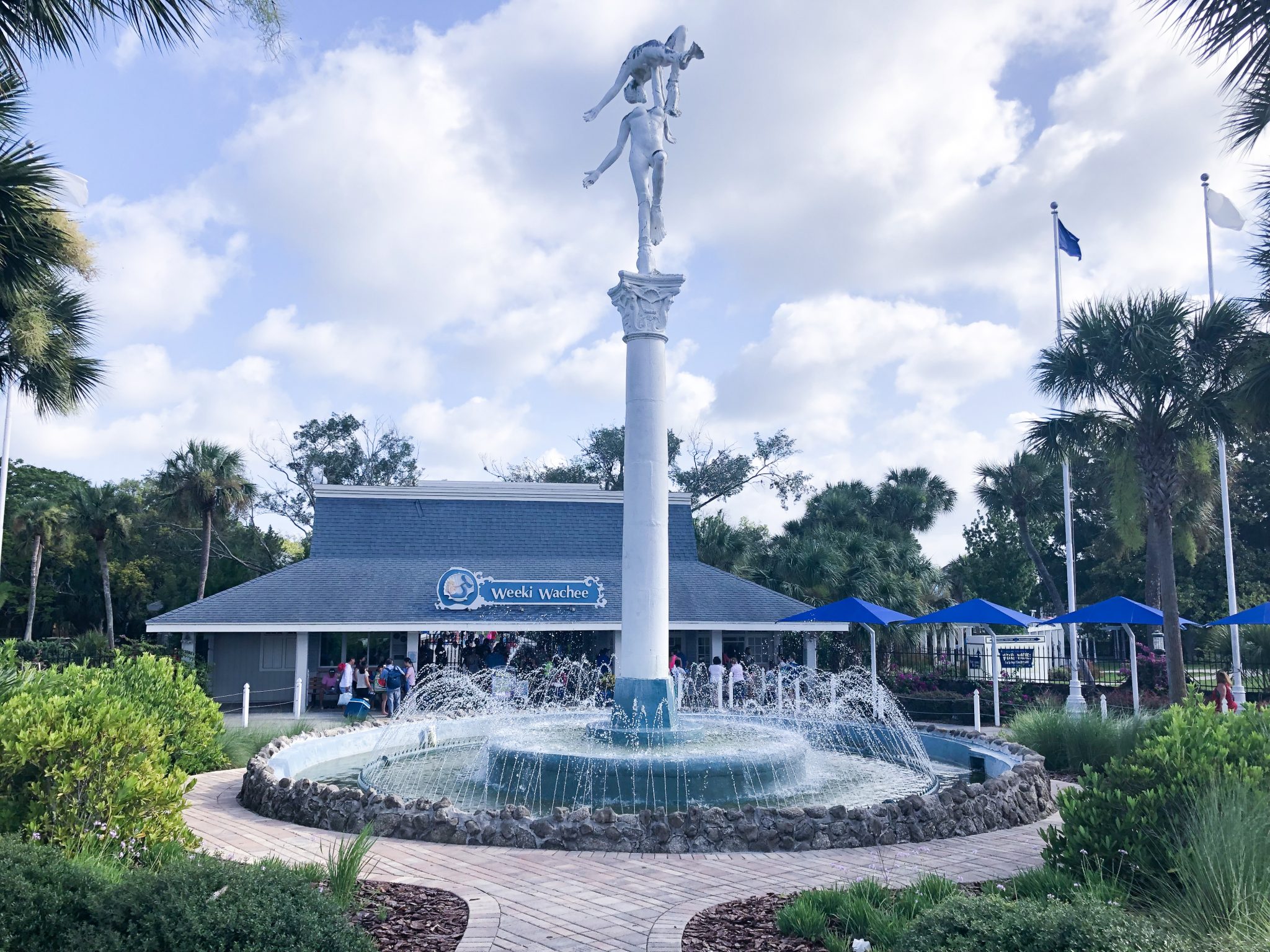 Imagine a world where mermaids swim through crystal clear blue waters, breathing underwater, dancing to music. A place where you can slide into crystal clear freshwater springs. Somewhere your family can explore and learn more about a former roadside attraction of the last century. There’s no need to imagine all this – it all takes place where you can see mermaids at Weeki Wachee Springs in Florida.

History of The Springs

Located on the west coast of Florida, Weeki Wachee has the deepest natural springs in the United States. The springs expell about 150 million gallons of crystal clear fresh water per day and maintain a temperature of 72-74 degrees Fahrenheit year-round. Named by the native Seminole Indians, the springs flow directly into the Gulf of Mexico 15 miles away.

Outside of the Native Americans using the springs and a skirmish or two during the Civil War, the area surrounding Weeki Wachee was fairly desolate until after World War II. Then in 1946, a Navy SEAL named Newt Perry came to the area. He came up with the idea of a roadside attraction that featured women swimming underwater using breathing apparatus hoses.

After cleaning up the springs which had become the area’s dump, Perry built an underwater theater. The theater is still in the same location but larger than the original 18 seats. Now it’s built into the limestone and is 6 feet below the surface. Perry found some women who agreed to be ‘mermaids’ and trained them to swim using the air hoses. They can also eat and dance, all while underwater!

By the 1950’s, car travel became huge in the United States and Florida was becoming more and more popular (thanks air conditioning!) Weeki Wachee was a roadside attraction and became one of Florida’s most popular vacation stops. Even Elvis Presley visited to see mermaids at Weeki Wachee Springs.

Things To Do at Weeki Wachee

Weeki Wachee Springs State Park is built into two sections: Weeki Wachee and Buccaneer Bay, which is the water park. Admission to the park provides entrance to both sides.

When visiting, it’s good to remember that the Weeki Wachee side was built in the 1940’s and has an old-timey feel. It’s not that things are run down. In fact, recent renovations were done to the walkways and mermaid theater. It’s just that it’s a small park and doesn’t have lots of flash and pizzaz, which is why I love it so much.

The park’s pontoon takes you down the Weeki Wachee River with a captain who gives a guided tour. The tour takes about 30-40 minutes and the captain will point out wildlife and give you some history about the area. It’s a great way to get a good view of the river without renting a kayak. If you visit in the winter months you might spot a manatee or two since they gravitate to warmer waters when it gets colder.

The wildlife show is a great way for visitors to get a glimpse of the wildlife that resides in Florida. One of the rangers brings out native birds, snakes and alligators and explains how they interact with the eco-system of the state. Don’t worry if you aren’t keen on getting close. Everyone sits in bleacher seats while the animals are on the stage.

Let’s be honest – boat tours and wildlife shows are fun. But people visit to see mermaids at Weeki Wachee Springs. There are over 20 mermaids that work at the park and swim int the shows 365 days a year. They also have mermen, or Princes as they’re called since they’re part of The Little Mermaid show.

Sitting in the 400-seat theater, watching the curtains lift and seeing the mermaids performing to the music being piped into the theater is an experience unlike any other. While you know that these are humans with tails attached and you can see them holding their breathing tubes, it’s hard not to be mesmerized by the underwater ballet being performed.

Since Weeki Wachee is a living spring, you will even see wildlife like fish and turtles swimming by as the mermaids perform. During one of the shows we went to during the winter, we looked in the background and saw a manatee swimming by. Where else can you get that experience?

The shows are about a half-hour long. There is a video pre-show that shows the history of the springs along with footage of mermaids from the past performing. The theater can fill up quickly so I suggest that you arrive at least 40 minutes before showtime during the crowded summer months to see mermaids at Weeki Wachee. After the show, make sure to head to the area outside the theater where one of the mermaids who didn’t perform is available to meet and take pictures with visitors.

Have you ever considered being a mermaid? Becoming a mermaid requires an audition and includes an endurance swim test and the ability to tread water for 10 minutes. If you’re like me and a little too old to audition but would love to experience what it’s like to be a mermaid, think about going to mermaid camp. For children who are too young to work as a mermaid, there’s a camp for them too!

On the opposite side of the mermaid theater is Buccaneer Bay. A waterpark that features three water slides, a floating dock, swim area and lazy river, Buccaneer Bay is built right into the freshwater springs of the park.

Buccaneer Bay has a sand area that has lounge chairs on it. You can also put your towels out on the grassy area to sit. People bring their own small tailgating tents or pop-up cabanas – those are only allowed to be set up in the grass.

If you’re traveling with older children (pre-teen and above) you’ll feel comfortable letting the kids get on the slides or in the lazy river in groups since it’s a small place and there are lifeguards at every ride. If you have smaller children under the age of 11, you’ll want to walk around with them.

There are height restrictions on the slides but not on the lazy river. The floating dock you have to have the ability to swim out to. The spring is more than 6 feet in some spots so swimming skills are required. Flotation devices aren’t allowed inside Buccaneer Bay unless the child cannot swim without it. So lifevests and baby floatation devices are okay; decorative pool floats aren’t allowed.

Only open during the summer, Buccaneer Bay can fill up very quickly resulting in both parks closing to additional visitors. Tickets aren’t available for pre-purchase so the best way to avoid this is to arrive at the park before it opens. You can also follow Buccaneer Bay on Facebook or Twitter for updates of when the park has reached capacity.

Both Weeki Wachee and Buccaneer Bay have food and drinks available to purchase. Choices include burgers, wraps, chicken fingers, sodas and ice cream. The prices aren’t too high and the quality is good.

If you’d like to save some money, small coolers are allowed to be brought into both parks. No alcohol is permitted to be brought in from the outside. Buccaneer Bay does have a tiki hut bar that’s open for frozen drinks and beers.,

At Buccaneer Bay you can rent lockers, umbrellas, chairs and pop up cabanas. To ride the lazy river you’ll need to purchase a tube wristband for $7 but the wristband is good for unlimited rides throughout the day.

Weeki Wachee is a very small town. There is a motel across the street and several in the surrounding area. I’d suggest that you stay in the Tampa/Clearwater/St Petersburg areas and make a quick day trip. It will only take about 75 minutes from any of those locations, and you’ll be closer to a wider variety of things to do during the rest of your stay.

A trip to Weeki Wachee Springs is a trip into Florida’s past and the days of smaller roadside attractions. An opportunity to see mermaids at Weeki Wachee shouldn’t be missed, and makes for a fun visit while vacationing with the family.