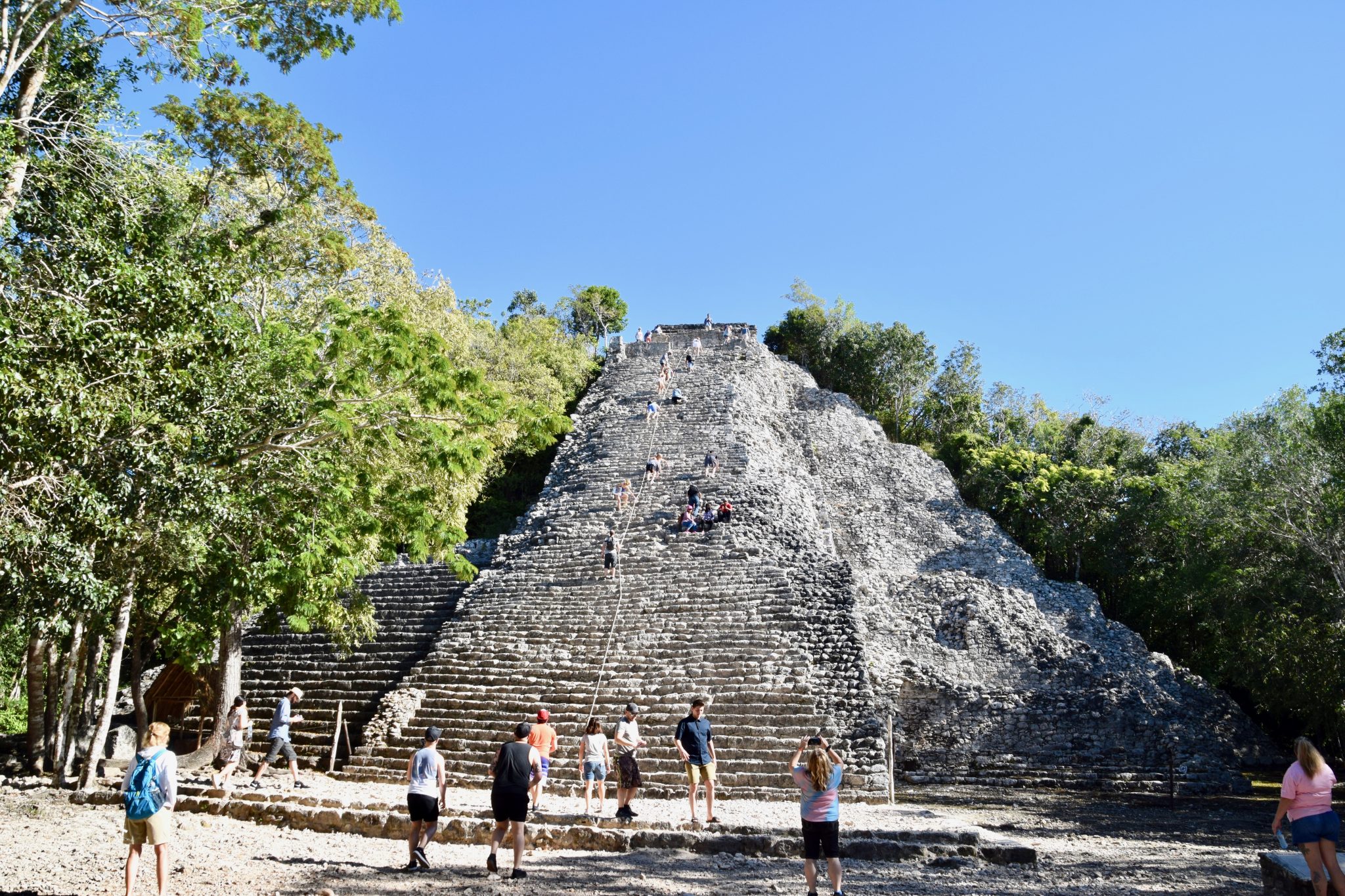 There are so many fascinating things about the ancient Mayan culture that inhabited large areas of Mexico’s Yucatan Region. Perhaps it’s the nascent archeologist in me, but I really love the allure of uncovering objects and mysteries from long ago. Recently I had an amazing experience on a tour of the Mayan culture at Coba, and it changed me.

“It changed me” is a strong statement to make, but this tour of the Mayan culture at Coba did just that. There is something so peaceful in the simplicity of their culture, how they revered nature and its forces. Immersed into the Mayan culture with the local tour company Alltournative, I had the chance to see things from a different perspective. I returned home feeling more connected to nature, and less concerned about some of the modern-day trivialities that had consumed me before the trip.

So yes, my tour of the Mayan culture at Coba changed me.

The Ruins of the Mayan Culture at Coba

As our tour van dropped our group of ten adventurers at the entrance to the Coba ruins, I knew something was up. Unlike my previous visits to the ruins of Chichen Itza and Tulum, Coba seemed very unassuming. Somehow more real and authentic. Yes there are some shops and a restaurant or two, but it’s not overrun with commercialism like the other two spots. Perhaps it’s the remote location of Coba, which does not seem to be near any major towns or villages.

We were staying at the gorgeous and luxurious Grand Velas Riviera Maya Resort in Playa del Carmen, and the drive to Coba was only about 1.5 hours. Coba was decidedly not luxurious or gorgeous. Coba’s beauty comes from a different place.

Visiting the Ruins at Coba

After paying a small entrance fee, our group walked a short way as our guide Rebecca explained the significance of what we would be seeing. She told us a bit about what modern day researchers have learned regarding the ancient Mayan culture of this region. Rebecca also explained there is much still left to learn and uncover, with many mysteries still yet to be solved.

Throughout the Coba park acreage, we saw many stone blocks that contained faint or partial carvings. These stone carvings told stories about the rulers of the time, and the things they deemed so important that they literally had them etched in stone. Part of the difficulty in uncovering the answers to these stones was the way the Mayan cultures warred with each other. When a conquering ruler came into a village like Coba, they would strike the faces of the previous ruler and their histories from the stones. As we toured the grounds, we saw that all of the remaining stone carvings had their faces removed along with much of the detail.

Without knowing for sure the exact meaning behind the ancient Mayan culture’s use of the ceremonial ball courts, historians do know a little bit. The slanted stone edifices are angled away from a center walkway. Near the top of each side is a circular stone carving with a large round hole through it. It is believed that heavy balls were moved through these holes as part of a ritual.

Rebecca explained her own interpretation of this ball court, which had to do with the Mayan culture’s beliefs about life and death. She said they believed the sun died each night as it turned dark, and was reborn in the morning once again. That life and death were on the same plain, and just different versions of life as we know it. The ball court might have had something to do with honoring the sun and moon, day and night, life and death. Fascinating.

Walk, Bike or Ride to the Temple

After visiting the ball court, we were given the choice of how we wanted to continue our tour. On our own, we could either walk to see the remaining archeological sites. We could also pay a fee and be driven there in the back of a bicycle rickshaw, or we could pay a smaller fee to rent a bike and pedal ourselves. Our group opted for riding bikes up the pebbly dirt road to the remaining ruins.

After paying the rental fee, which amounted to less than $1, we hopped on and pedaled away. It was the perfect means to experience this site, viewed from a path through the jungle that ancient Mayan villagers also had used. In just about ten minutes of very easy riding on flat ground, we reached the Temple of Nohoch Mol.

Climbing the Ruins at Coba

Unlike the better preserved Mayan ruins at Chichen Itza, which are very impressive, Coba contains the Temple of Nohoch Mol. It is the tallest Mayan pyramid in Mexico. Visitors are allowed to climb to the top of this temple to take in the view of the overall site and surrounding jungle. So of course we did!

The stone steps leading to the top of the temple are not regular, equal steps. Rather, they are very steep steps, some crumbling in spots, and enormously uneven. It’s some 120 steps and 140 feet in all – in the hot sun and humidity. Needless to day, this climb is not for people with heart issues or folks who have trouble walking. By the time I picked my way to the top, I had carefully inspected each step for proper footing on the way up. It was still super fun, and I would do it again in a heartbeat.

At the top, the view is unimaginable. I could see what seemed like forever, looking across the green jungles of the Yucatan and Quintana Roo. Every so often, there was a small green hill that rose above the jungle. Rebecca had told us to be on the look out for these rises from the jungle floor. They are actually other Mayan ruins and temples yet to be uncovered and studied. There were dozens of them!

Blessed by a Mayan Shaman

The Mayan culture and language has been diminishing for centuries. In this modern world, most of the Mayan people have moved to cities for work and resources. We were fortunate to meet a Mayan Shaman along the path at a site outside of Coba. He stood with smoky incense burning and an altar of sorts made of sticks and flowers. Then he blessed our group using the traditional Mayan language. From what the translators were able to tell us, he was blessing us for safe travels and healthy lives. I’ll take it!

Swimming in a Mayan Cenote

Used throughout Mayan history for rituals and worship sites, the cenotes that dot the Yucatan Peninsula and Quintana Roo are beautiful and impressive. (Cenotes are deep swimming holes containing fresh water – the Yucatan hosts more than 3,000 of them). We visited a special underground cenote, reached via a cave and constructed staircase. The cave was well lit, which did not seem to bother the bats hanging from the rocky ceiling. Even the waters of the cenote were lit from beneath, giving the whole room an unearthly blue glow.

We stripped to our swimsuits, rinsed off any modern chemicals from our bodies, and plunged into the refreshing waters. Have you ever had the chance to swim inside a cave? It was like being on another world, and we all loved it. No one wanted to leave, despite being famished from all our morning activities.

We had worked up quite a hunger, and the lunch spread was beckoning. Our cooks had prepared a number of traditional Mayan dishes, made with local herbs and spices unique to this region. Chicken, pickled red onions, rice, small fried tortillas kind of like sopes, and other delicious vegetable dishes were set out in a buffet. We descended like locusts. Nothing was left in our path, and it was all so delicious.

As I stated at the beginning, I left this experience changed. I had a newfound respect for the ancient culture of this region, and had fallen in love again with Mexico. There are so many things to learn and places to visit in this fascinating, rich and diverse country. I can’t wait to see what more there is to discover. But on this visit, I left with something important: a healthy respect for the Mayan culture and people, and a strong desire to return and learn more.

I can’t wait to return to Coba for more exploration, and I’ll be contacting Alltournative again to guide me on my next adventure here.

2 thoughts on “Mayan Experiences at the Ruins of Coba”