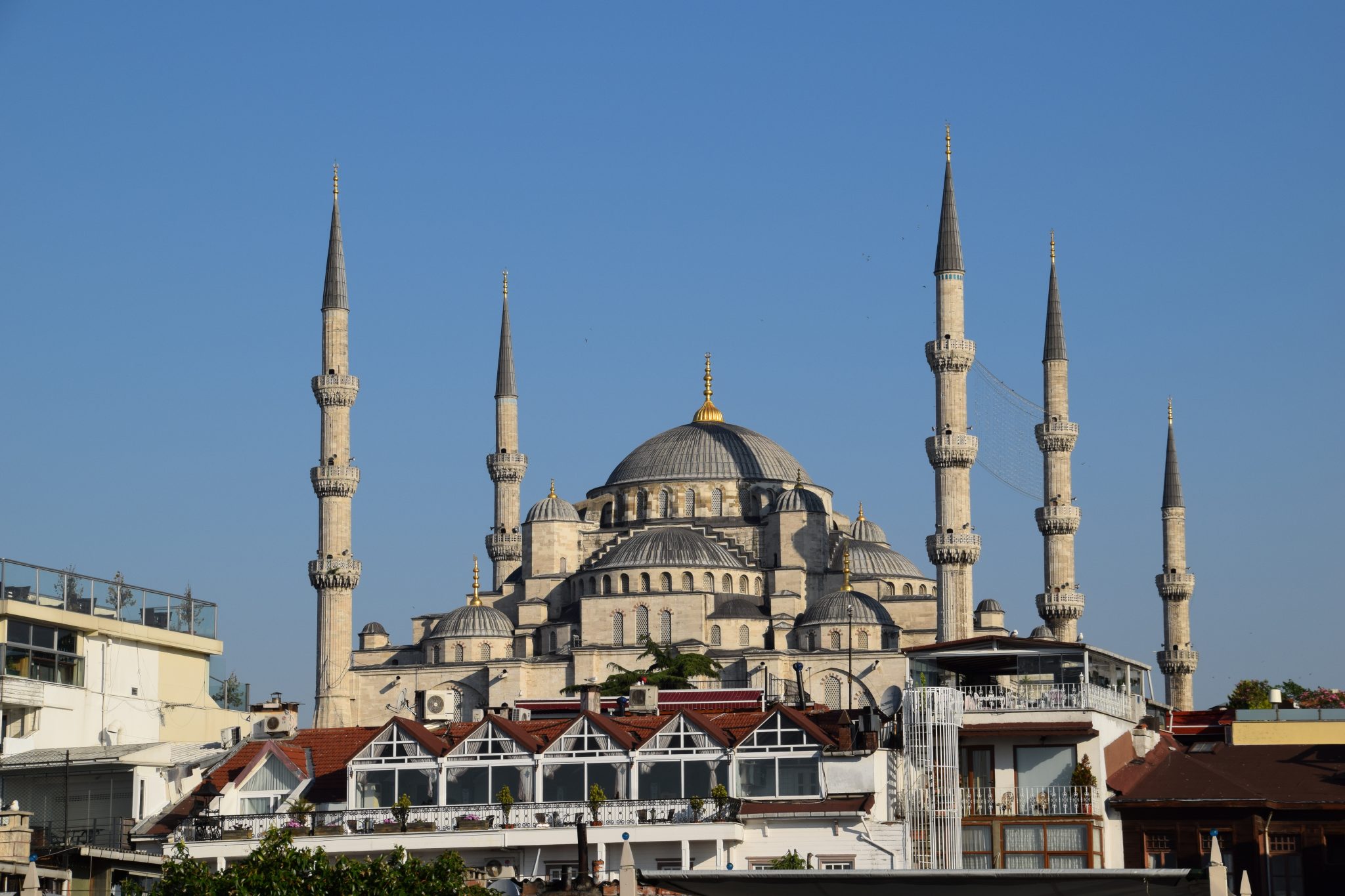 Istanbul has been on our bucket list for as long as I can remember. The sights, sounds, smells and tastes of this amazing city have always captivated our imaginations, and the real thing did not disappoint. It’s a perfect family destination, and truly Istanbul with kids is a feast for the senses.

Istanbul with Kids is a Feast for the Senses

At one point in history, the Ottoman Empire controlled much of Europe and Asia all from Istanbul (then called Constantinople). On each street of the city you see examples of culture from hundreds – sometimes thousands – of years of Imperial Dynasty rule. There is so much history on every block the tour guides rolled their eyes when we asked about a building that was “only” 500 years old. Go figure.

Hagia Sophia – Remarkable history as a Christian church, then a mosque. Now a museum with pieces of all those backgrounds still intact. Enormous and breathtaking.

The Blue Mosque (Sultan Ahmet Mosque) – It was amazing to view the inside of this gargantuan mosque, covered with blue tiles hundreds of years old. How solemn and inspiring it was for us to hear the call to prayer from outside its walls. Then we were allowed inside where prayer activities were quiet and reverent. Heads up: women have to cover up with headscarves and skirts out of respect for the culture. (They supply them for free at the entrance).

Tokapi Palace – If you are a history junkie like me, you will love the Ottoman Empire era Tokapi Palace. There are suits of armor, scimitars, jewel-encrusted daggers and battle gear on display. Or just skip into the Imperial Treasury to gaze at the 86-carat Spoonmaker’s Diamond. Impressive, to say the least!

Dolmabahce Palace – On the shores of the Bosphorous, the “new” palace (1860s) became the official modern home and office of the ruling Sultan. It features 285 rooms, the largest ballroom I’ve ever seen, and a whopping 4.5-ton glass chandelier. Opulent doesn’t even begin to describe it. We were even treated to an Ottoman marching band, performing some of the Sultan’s favorites out in front of the palace. The kids loved it!

Istanbul straddles the Bosphorous River and sits one side in Europe and one side in Asia.  This is literally the place where the historic Orient Express crossed from Europe into the Orient to continue its journey. Istanbul has always been at a crossroads of cultures. Its foods are a tasty example of this mix.

Turkish Coffee – Some places served a better cup than others, but this coffee lovers’ treat was omnipresent. When ordering, ask for sweet, more sweet or very sweet. I highly suggest you do not try it without sugar. (We learned that lesson the hard way.)

Fresh Seafood – At the meeting point of the Marmara Sea, the Aegean Sea, the Black Sea and the Bosphorous River, Istanbul’s fisherman can practically reach into the water and pull out a fish with their hands. The seafood is so fresh and delicious! Local restaurants are proud to serve it to you prepared many different ways. The kids were mesmerized in many restaurants, as they brought a basket of fishes to our table for us to point to the one we wanted.

Turkish Delight – Who knew there were so many different options? Turkish Delight is a sweet combination of dried fruits and nuts in a sliced roll. The traditional option is made from apricots and pistachios, but we found all kinds of variations to sample. And sample we did, every chance we got! The kids became legit connoisseurs.

Kebabs – With everything from traditional spiced lamb or chicken to more unusual combos – eel, anyone? – you’ll find kebabs everywhere in Turkey. Those from fancy restaurants and street vendors are equally tasty. We feasted for very little money with various treats on a stick.

In a city known as a mecca for shoppers, there are a few highlights worth the visit even if you don’t spend a single lire.

Some of our favorites:

The Grand Bazaar – Yes, it is both grand and bizarre, and you must see it. Like something out of the movies, it’s a labyrinth of tiny shops selling wares from the far corners of the Near East.

Spice Market – There are few places I feel overwhelmed, and this was one of them. It’s easy to get lost among the sea of options, piles of spices and choices of teas. So many colors, smells and tastes to choose from, and definitely worth a stop.

Rugs and Lanterns – Pretty much anywhere you walk, there is a rug merchant and, close by, a lantern store. Both are alluring, and it’s hard to know where to start. Just dive in and start talking. You will learn a lot, and by the third or fourth stop you’ll be negotiating like an expert.

Which brings me to my most important point: nothing in the shops should be purchased at face value. It is inherent in Turkish culture to bargain with the merchants. It’s a fun game, and the trick is to be willing to walk away. They will always come after you with a better offer.