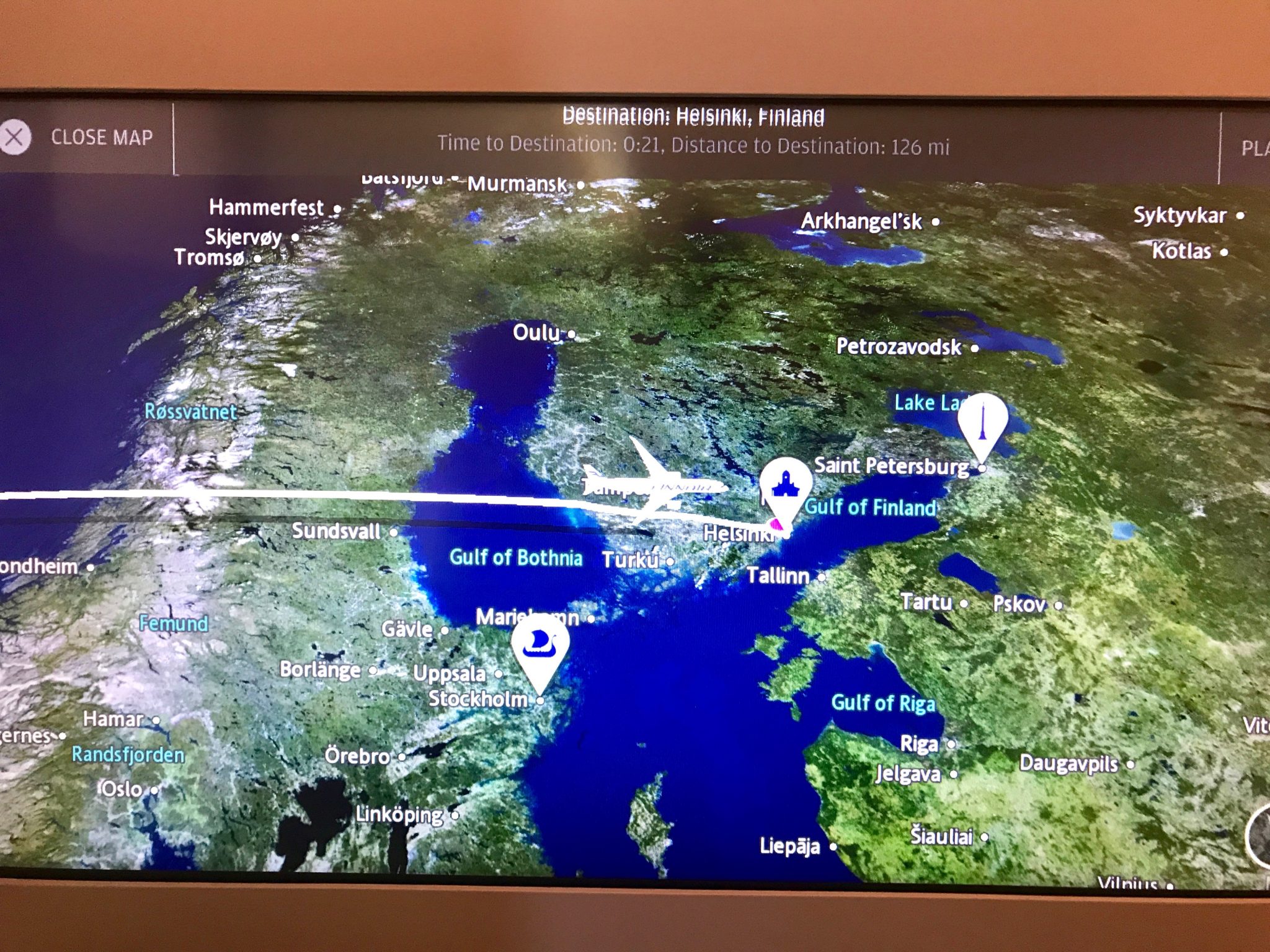 Finnair is stepping up their game considerably. The Finnish airline has heavily invested in its fleet by adding more than 13 Airbus A350 jets over the last few years. Along with that investment comes new and longer routes, because those A350’s are way more fuel efficient and speedy. I had the opportunity recently to join the airline on their inaugural Finnair direct flight from LAX to Helsinki. It was a pretty darn cool experience.

I had the privilege of being seated in Business Class, of which there are 46 seats on this aircraft. There are 43 Economy Comfort seats on the Finnair Airbus A350-900, and another 208 Standard Economy class seats.

I’ve not been on an inaugural flight before, and the excitement and anticipation in Los Angeles International Airport was palpable. Finnair had not had a flight from LAX in more than 30 years, so it was a big deal for them to begin with this flight. There were balloons to greet passengers at the brand new check-in counters, and many smiling agents to help the process go smoothly. It was really kind of sweet actually, since they were all so excited!

The gate where we would depart was at the very end of the Thomas Bradley International Terminal, and more excitement was developing there too. There were dozens of blue and white helium balloons (the airline’s colors) and a full spread of treats along with a celebratory cake to honor the occasion. The flight crew posed for photos while we waited to board, and then we all queued up to enter the aircraft and take our seats.

Since I was seated in Business Class, our group boarded through a door located near the front of the plane. As soon as we stepped on board, I was so happy to see the clean lines and extremely well designed cabin.

Business Class Seating on the Finnair Airbus A350-900

For this Finnair direct flight to Helsinki, we would be flying overnight and I was so happy to be seated in Business Class. Coach seating looked way above average too, but my lay-flat seat in Business Class ensured I would have a good night’s sleep on the 10.5 hour flight. We would be flying over the North Pole, Greenland, Iceland and then the Norwegian Sea before reaching Finland and landing in Helsinki.

One of the design features of the extra wide-body Airbus A350-900 is an incredible amount of room to move around. The ceiling heights are quite spacious, and there were just 4 total seats across each row in Business Class. I was seated in the right(is that port?) side window row, then two seats were paired in the center and another row of seats on the (Starboard) side. I also liked that the seats were staggered, so if I happened to peer out from my private cocoon I would still not see anyone next to me. Loved it.

The happy flight attendant poured me a celebratory glass of champagne, and I settled in to my comfy seat for take-off. (More on my seat later.) She even came around with a polaroid camera and took a photo of me to mark the occasion. There was a commemorative little frame for it too!

Regardless of where a passenger was seated on this inaugural Finnair direct flight from LAX to Helsinki, there were features of the Airbus A350 aircraft anyone would cheer for. First, the windows. The windows on this airplane are ENORMOUS. Most people above five feet tall have to stoop to look out an airplane window, especially when seated right next to it. These windows are enlarged and oval, giving passengers a far better view of what’s going on outside.

Another wonderful thing? This aircraft is quiet. Sooooo quiet. The new engine design of the Finnair Airbus A350 must have some sort of sound muffling system in place. I noticed almost immediately upon take-off that the characteristic roar of airplane engines was not apparent. It was never noticeable throughout the entire flight.

And the restrooms – not an area that passengers usually find pleasant on any aircraft. On this Finnair flight, however, the restroom was spacious (!) and stocked with luxury amenities like face lotion, body lotion, face spritzer, air freshener and more. I’ve never lingered in an airplane bathroom for any reason – ever. This one however? I took my sweet ass time.

My cocoon was heaven – I don’t even like to call it a seat. Angled away from the aisle, the seat was cushy and comfortable upright, and downright dreamy when laying fully flat. Near my left armrest was a large compartment holding my own set of full headphones. To my right was a little table surface, and a hook to hang I-don’t-know-what. Several other compartments held various menus, magazines, flight information documents, etc. The well for my feet was large enough to fit me comfortably, but it’s the only area I wished had been slightly larger so I could turn on my side easily while sleeping. The seat pillow? Designer Finnish chic in authentic Marimekko blue and white polka dot pattern.

I liked the enormous size of the entertainment screen as well. It swiveled towards me from the console for easy viewing, and could be pushed away when I no longer wanted to watch anything. And by enormous, I mean larger than any I have seen – easily 14 or 15 inches across in my estimation. High quality image and sound too.

I slept like a baby for a good 5 hours, before waking up to have a light breakfast and coffee before landing.

Okay, I was a little worried about what I would be served in Business Class on a Finnish air carrier. I let them know I am not a big fan of fish to avoid any craziness (I actually like many types of seafood but I was scuurrrrdddd.) Sure enough there were odd seafood dishes served, which I managed to avoid. The meals were pretty good, but nothing memorable that I would rave about here. It’s hard to get airplane food right, and they tried hard. I will leave it at that.

However, let’s talk about Finnair’s glassware because it is truly gorgeous. Created by Finnish designer Ultima Thule, Finnair’s signature glasses are made to look like melting ice and icicles. So delicate and beautiful. And I was given a set to bring home! It’s a mighty classy way for me to enjoy my occasional post-work scotch on the rocks.

The breadth of films and other shows on the onboard on-demand entertainment system was impressive, and I watched a couple of movies before nodding off. Picture quality as excellent, and so was sound – the airline-supplied stereo headphones were very good for noise reduction and sound.

Another cool thing I would qualify as entertainment: the live cameras installed on the tail of the plane. One camera faced forward, looking down the aircraft towards the direction of flight. The other pointed downwards, so I could view what we were flying over. This whole live cam concept fascinated me, and I must have checked back in on it two dozen times in flight to see what I could see. So very cool.

One of the other surprises I enjoyed was the light show on ceiling. While we jetted across the globe, there was a light projection experience on the ceiling that morphed in shape and color.I joked with the flight attendant that it looked like the Northern Lights, and he said that is exactly what they had planned. Go figure! As it turns out, these were the only sightings of Aurora Borealis that I would experience on this visit, because evidently the season for viewing had recently passed. Darn it!

Usually I don’t get very excited about an airline amenities kit. However, this one stood out because it was contained in a sweet little zippered Marimekko pouch. Blue polka dots on a blue background. Inside were designer face cream, lip moisturizer, face moisturizer, toothbrush and toothpaste. I packed mine into my carry-on to bring home for the girls, and got another one on the flight back home. They were big hits at our house!

An Airbus A350 is a very large aircraft. Ours seated  people and weighs more than 205 tons unloaded. Well this Finnair pilot should be commended, because he touched that airplane down on the runway at Helsinki International Airport (HEL) gently. It was so gentle, in fact, that several passengers did not realize we had landed until the characteristic bumps of the runway asphalt made us feel the ground a bit.

We taxied up to the gate, deplaned and breezed through security to grab our luggage. All in all, a spectacular experience – I am so very glad I got to be part of this momentous occasion. Finnair had a lot to celebrate, and rightfully so. I expect this Finnair direct flight from LAX to Helsinki to be extremely successful for the airline. And judging from the positive reactions from the rest of the passengers on our inaugural flight, it will be.

2 thoughts on “Finnair Wings It to Helsinki in Style”