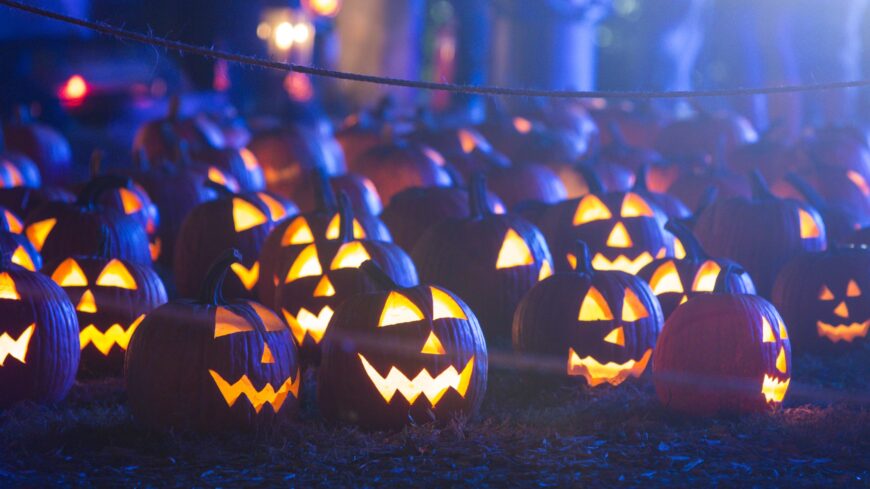 Everyone knows the state of New York, thanks to New York City. The most populous city in the United States, New York City, is a must-see. But there is so much more to New York than The Big Apple. The state is full of lakes, mountains and plenty of sites to see. No matter if you love art, sports, sports, food or wine, you’ll find it in The Empire State. Here’s our selection of the best road trips in New York.

Note: due to COVID-19, some attractions may be closed. As you take your road trips in New York, be sure to check websites for updated hours of operation. The state of New York requires anyone over the age to 2 to wear a face mask in public if they can’t distance themselves. You must wear a face mask on all public transportation.

Start off looking for the Headless Horseman and end your trip learning how to blow glass. Washington Irving lived in nearby Tarrytown and based his most famous tale on the local village. Corning, home to the company that created CorningWare, is a small city with lots to see and experience. This is one of many road trips in New York will take you through small villages and towns you’ll love exploring.

The village of Sleepy Hollow is called one of the most haunted places in the world. And the story of the Headless Horseman isn’t the only reason why. The village has had a history of hauntings and ghosts since before the Revolutionary War.

If you enjoy spooky tales or Halloween is your favorite holiday, Sleepy Hollow is for you. Sleepy Hollow Cemetery offers day and evening tours. The Great Jack O’Lantern Blaze in nearby Croton-on-Hudson features more than 7,000 carved pumpkins. Or go on a Haunted Hay Ride, which follows the route Ichabod Crane takes to escape the Headless Horseman.

Things to Do in Sleepy Hollow:

With hundreds of miles of hiking trails, camping areas, scenic roads and lakes, Harriman State Park is the second-largest park in the New York state parks system. Explore the bird conservation areas where you can see bald eagles, osprey, and many varieties of warblers. There’s also plenty of places to have a picnic, take a hike, swim, and hunt.

Take a slight detour to visit Denton Falls. With hiking trails and plenty of bird watching, there are three waterfalls to visit – Denton Falls, High Falls and Mullet Falls. The 8.4 looped trail gives plenty to see in nature. Dogs are allowed but must be on a leash.

Home to 6 antique carousels, Binghamton is a must stop for anyone with kids or who is a kid at heart. A bonus? Five of the six are free! Stop off to visit Recreation Park Carousel, which has been on site since the 1920s and has 60 horses to ride on. Others to see are West Endicott Park, Fred Johnson Park (Johnson City), George W. Johnson Park (Endicott) and Highland Park (Endwell).

The sixth carousel is at Ross Park Zoo. After you ride the carousel, explore the zoo grounds to a wide variety of animals, including endangered species like red pandas, snow leopards and African penguins. Didn’t get enough of the animals at the zoo? Head to Animal Adventure. An outside venue, you can see reptiles, mammals and birds. They also offer a Drive-Thru Zoo in case you’re concerned about social distancing.

Called ‘Crystal City,’ Corning is where you can find many versions and styles of glass. Home to Corning Glass Works, the city has become a place where glass experts and glass artists come to live, learn and teach.

Home to American art, Rockwell Museum features sculptures, photography and paintings that, according to their website, gives “a visual narrative of the American experience.” With permanent and rotating exhibits, the Rockwell is an affiliate of the Smithsonian museum system.

The Corning Museum of Glass explores over 3,000 years of glass, tells how glass has changed the world and has the largest display of glass design and art. You can also schedule time to make glass.

Love wine and beer? Corning is in Finger Lakes Wine Country. Featuring over 125 wineries, it’s the largest wine-producing area east of California. In addition to vineyards, there are also plenty of microbreweries and distilleries to enjoy.

Visiting New York City is an experience you won’t forget. It’s a city that accepts all races and genders, offers historical sites and, of course, Broadway. But driving in the city and its surrounding boroughs during your trip isn’t recommended. It’s very crowded and has many one-way streets. However, a road trip leaving from New York City is a fun way to explore the rest of the state.

After exploring and enjoying the city, you’ll need to rent a car for your road trip from New York City. In the state, rental agencies must rent to anyone with a license and over 18. But they can charge a surcharge to anyone under 25. You also aren’t required to use a credit card and can pay in cash. Pick up your rental car at any of the offices throughout the city or head out one of the airports to rent (sometimes that can be less expensive).

If you’re parking overnight, be sure if you park on the street that you’ve read the street signs and are compliant. The city’s signs can be confusing and the rules change from day to day, depending on if street cleaners or snowplows need to come through.

80 miles north of New York City is New Paltz. The town was founded by French Huguenots in the 1600s and has retained its old-world charm.

Historic Huguenot Street is a National Historic Landmark District with a reconstructed church from the 1700s, landmark stone homes, an archaeological site and a burial ground that includes the first settlers. Tours are available.

If you’re looking for a unique place to stay while in New Paltz, head to Mohonk Mountain House. The views of the Catskill Mountains and Lake Mohonk will take your breath away. There are also day passes for anyone who wants to hike the 85 miles of trails, go golfing, experience horseback riding or go ice skating outside in the winter.

One of the first locations considered to host the Woodstock Music Festival, Saugerties is 30 miles north of New Paltz. This small village has plenty to see.

Dating back to the 1800s, Saugerties Lighthouse overlooks the Hudson River. Now docents provide tours of the lighthouse’s interior and you can enjoy a day visit to explore the grounds, have a picnic near the beach or hike the half-mile nature trail. The Saugerties Lighthouse is also a small bed & breakfast – if you’re interested in staying, plan far in advance. There are only two bedrooms, so they fill up quickly.

Head out to the two historic homes in the area: Clermont Manor and Montgomery Place Historic Estate. Clermont Manor is located north of Saugerties on the Hudson River and offers 5 miles of trails and house tours. Montgomery Place Historic Estate is located just south of the city and has fantastic views of the Catskill Mountains and the river. Now owned by Bard College, the estate has grounds to explore, walking trails and six houses to view.

You’ll be surprised that there’s more to the village of Cooperstown than baseball.

The Fenimore Art Museum has many art types, including Native American, American folk, decorative arts, and 19th century photography. The museum also contains the original letters that lead to the duel between Aaron Burr and Alexander Hamilton.

After vising the Fenimore, head to Hyde Hall. This historical home overlooks Otsego Lake, often referred to as Glimmerglass. Said to be haunted, the house offers mansion tours.

The Farmers’ Museum focuses on teaching about the rural life that existed in the area hundreds of years ago. There are a variety of buildings to explore and a farm with live animals.

And of course, there’s the Baseball Hall of Fame. Often referred to as America’s Sport, baseball has deep roots in the United States of America’s culture. The Hall of Fame offers a museum full of exhibits such as ‘Diamond Dreams,’ which honors the women who have played professional baseball.

One of your road trips in New York has to include visiting Niagara Falls. A group of three massive waterfalls, Niagara Falls can be visited from either the American or the Canadian side. Starting in the state capital and ending at the most powerful waterfall in North America will help you see different parts of the Empire State.

The capital of the state, Albany has plenty to do for anyone who loves history.

The New York State Museum is the largest and oldest state museum in the United States. There are collections in botany, media, history, art and anthropology. There’s even a carousel inside (I’m sensing a carousel theme in New York).

Interested in politics? Take a tour of the New York State Capital building. Costing $25 million in the 1800s, the capital is a carved stone building with decorative halls and chambers. Also, be sure to see the Empire State Plaza, the Plaza Art Collection and the Executive Mansion.

Home to Syracuse University, Syracuse is called Salt City because, at one time, it was the salt-producing capital of the United States. Now you’ll find programs at the university, museums and a zoo.

Featuring more than 700 animals, the Rosamond Gifford Zoo is a great way to get outside and explore. The Erie Canal Museum tells the story of construction on the Erie Canal and includes tours and exhibits. And if you’re in Syracuse from mid-August to the beginning of September, be sure to go to The Great New York State Fair. The oldest state fair in the country, you’ll enjoy food, concerts, exhibits and one of the largest midways with more than 90 games and rides.

The first women’s rights convention in the USA was in Seneca Falls in 1848. So you’ll find plenty of museums and structures about this historic time in the country’s history.

The Women’s Rights National Historical Park includes various locations on Fall Street, including the Wesleyan Chapel, where the convention was held, Elizabeth Cady Stanton’s home and M’Clintock House, where the planning of the convention took place. There’s also the National Women’s Hall of Fame.

Looking to enjoy the award-winning wineries of the area after visiting the museums? Referred to as America’s First Wine Trail, the Cayuga Wine Trail features 14 wineries and dining options along the way.

There are many majestic nature sites in the United States. One that’s towards the top of the list is Niagara Falls. The Falls extends from Canada into the US, and while the Canadian side is said to be the better view, the view from the New York side isn’t shabby. You can also cross over to the Canadian side to see the Falls from both countries (note: the border of Canada is currently closed to most United States citizens due to COVID-19).

The first state park in the USA, Niagara Falls State Park was designed by landscape architect Frederick Law Olmstead who also designed Central Park. In addition to being able to view Niagara Falls at the park, you can also enjoy the landscaping, which attracts a variety of wildlife or hike the 15 miles of trails. There’s also a theater, aquarium, discovery center, or you can take a tour to Cave of the Winds, which gets you as close to the Falls as you can get.

Have you ever taken road trips in New York? What’s your favorite way to explore The Empire State?

Back in August, you may remember we talked about G