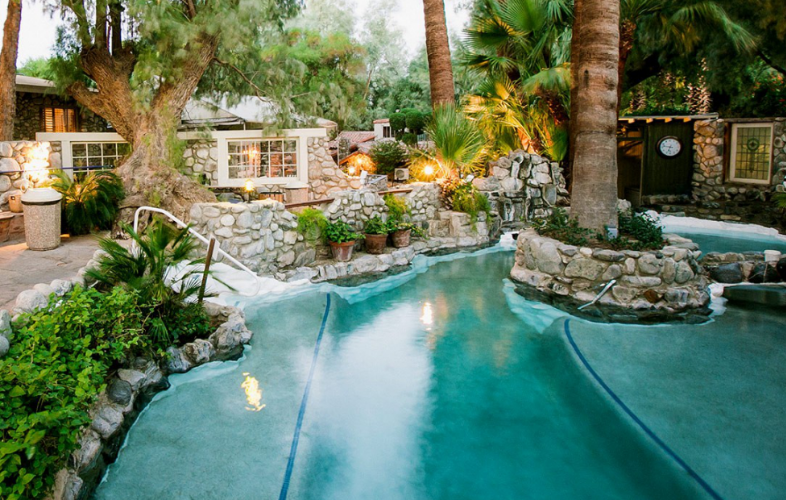 I had reached that breaking point – you know the one. Crispy around the edges, a little too sharp with my responses to the kids’ and coworkers’ demands, generally being a bitch. Yes, daddies get there too.

Luckily I have an amazing family, who understood my need for some “me time”. So it was off to the Palm Springs area for some R&R and a whole lot of quiet at Two Bunch Palms Resort & Spa. The reputation of this renowned destination is legendary, but it had been many years since my last visit and I wasn’t sure if the modern-day version would live up to its heyday years. But it did – in spades.

Still a bit granola-crunchy in a hippie chic kind of way, Two Bunch is not for everybody. This is not the Four Seasons, where they practically wipe your ass for you with warmed towels on a silver tray (not that I think that’s a bad thing). Two Bunch still fits within the parameters of luxury, but more in a lululemon kind of way rather than Gucci. The cars in the parking lot said it all – Range Rovers, Volvos and Audis were well represented, and so were Acuras and VWs with a smattering of Suburus thrown in for good measure. Many had tell-tale little handprints on smudgy windows, and a few had made half-assed attempts to conceal their childseats. Yep, my peoples.

I was the only (gay) guy alone in this crowd, which was just fine and dandy with me. I wasn’t looking for comraderie or conversation – I wanted silence.

The grounds are peaceful and serene. For a moment I panicked when I saw a lone bench perched by the lake under a shade tree, worrying I had admitted myself to a nut farm. Yet, later in the trip I found myself sitting on that same bench, feeling far less nutty than I had when I arrived. 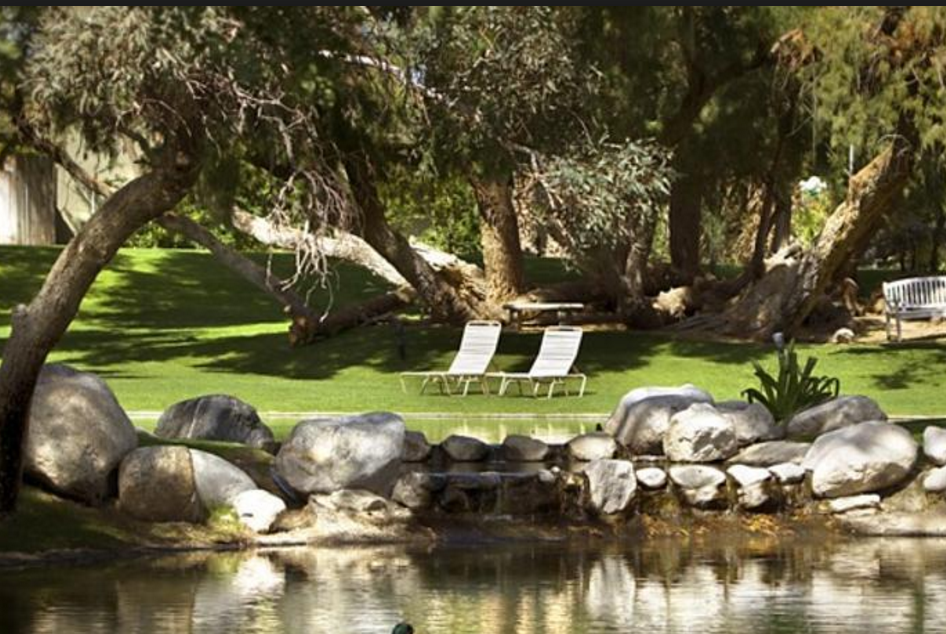 Lazing by the pond at Two Bunch Palms

What makes Two Bunch so special is the water. Seriously. The resort sits atop a natural hot spring, pumping 700-degree water from deep within the Earth up into cooling tanks. Then it cascades into a Grotto Pool surrounding by towering palm trees, where crazy fucks like me can soak out our poisons. It was never empty of guests. Signs by the Grotto instructed us not to speak above a whisper, but of course there is always that one lady…

From the Grotto to the Spa, I trudged my sorry ass into a treatment room. I hear the resort owners are planning an entire new spa building, and I say it’s none too soon. The current building is very charming in an old-school way, and the tile mosaics somebody’s grandma made in 1987 are holding up pretty well. Still, the modern aesthetic calls for something a bit more, well, modern. BUT, with capital letters you notice, the treatments are superb – really top notch – so I cared little about the interior design as long as it is clean (it was). I had a facial that left me all dewy and fresh, ready to tackle a delicious meal in the resort’s restaurant.

After more soaking the next day (the Two Bunch staff calls it “taking the waters”, which sounds so charmingly turn-of-the-century) I enjoyed a spectacular massage of epic proportions. This was not one of those butterflies-landing-on-your-back episodes where you can barely feel the masseuse’s hands fluttering against your disappointed skin. This was hardcore, deep tissue realness that drains the evil toxins from your body by literally pushing it out of your muscles and bones, reaching all the way into your DNA to purge even the leftover hatred of that girl in fifth grade who made you miserable on the playground. Remember her? Yep, gone.

I also had a weirdish body treatment called a salt scrub, where they laid me on a table and poured the hot springs water over me out of a garden hose while rubbing my skin with coarse rock salt. Sounds like torture, but it was actually pretty nice in a hurts-so-good kind of way. Since my theme for this weekend was to sand my rough edges, this was a great way to apply the finishing touches. Like a restored antique table, I felt solid, sturdy and useful again.

Along with a daily schedule of yoga, tai chi, hikes in the desert, wine tasting, drumming with a shaman and a bunch of other cool activity choices, Two Bunch Palms can be a transformative experience – if you let it. And I let it, with great inner peace and restored serenity.

After all, everybody needs a little namaste in their life once in awhile, amiright?